A Gift for you on our Birthday 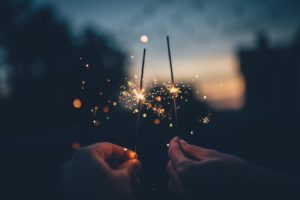 I was a reluctant entrepreneur.  I didn’t have business school training, or someone else’s money, or a killer app to get me started. In fact, in 2000 when I launched Insight Communications, apps didn’t exist.  After many years in corporate communication leadership roles, I knew I wanted more.  I left my job without a detailed plan. It was an eye opener.  Gone was the status that came with my previous role, my dedicated assistant, and a cool Midtown office. My new office was my dining room table. And it turned out just great.

None of it would be possible without the customers who have sustained us, challenged us, and inspired us along the way.  I am so thankful to them, particularly to Clay Robbins at Oglethorpe Power who was our first customer.

To celebrate our birthday, we have a gift for you: Our viewpoint on communications that separates great workplaces from good ones.  Enjoy!

Less is more. The secret to effective communications is keeping it simple. Resist the urge to add more superficial detail.  Your audiences will pay attention.

Commitment at the top is the key to success. We’ve worked with both types of leadership teams -those that are aligned and those who just say they are. Your employees recognize when your leaders don’t walk the talk. Get in step.

Personal stories leave a handprint on the heart. The shortest distance between two people is a story. When you share a personal story, people pay attention and remember the point of your message.

Be credible. We’ve seen more than a few companies ballyhoo their fantastic culture externally, while internally, the high performers are beating it out the door. Respect your employees enough to tell the truth. Be brave enough to be transparent, even when the news isn’t good. The most successful businesses tell it straight and involve employees in solutions.

Make your employees the stars. Let’s face it; we’ve all seen enough of the CEO.  How often do you hear from frontline employees? Make employees the stars of your internal communications, recruiting and social media.  It will bring your brand to life for customers, partners, and new talent.

Ten years ago, picture this scene:

I’m sitting with friends in a mostly-empty Phillips Arena to watch the Atlanta Hawks play the Boston Celtics. Actually, that’s not quite accurate. We weren’t really there to watch the game. We were there to get autographs from players, to hang out in freely-upgraded seats near the court (to try to mask the poor attendance to television viewers), and to troll the opponents as they walked to and from the locker room. Tickets were only $10, so it was a pretty cheap way to waste a Friday night in high school. The Hawks lost by 20. But to look on the bright side, Hawks employees gave us a box of inflatable thunder sticks (inflatable noisemakers) to take home. By the end of the season, the Hawks had won 13 games, and we’d won four boxes of thunder sticks and several items of game worn memorabilia — five shoes, two headbands, and a sock.

The NBA is a glamorous TV product that is played by some of the best athletes on the planet. But in Atlanta, the team was so bad that most of the “crowd” (and I use that term loosely) had to find ways outside the court’s lines to entertain themselves. If you did focus on the game, it was ugly. Not only did the team rack up poor results, but the quality of the play was terrible. Lots of standing around. Lots of one-on-one offense. And lots of complaining by players and coaches, which lead to the same by the fans.

Skip ahead to today, where the Hawks have the best record in the Eastern Conference and are the only team to have punched their ticket for the playoffs with a hefty 18 games still remaining in the regular season. They produced four all-stars — a club record. They’ve had a 19 game winning streak, tied for the sixth longest in NBA history. I never would have believed such success was possible 10 years ago.

The credit has to go to Head Coach Mike Budenholzer and the players who have adopted his “team first” mentality. His leadership is a perfect example to any leader in any walk of life on how to turn a team into something greater than the sum of its parts. The newly found success of the team is rooted in this philosophy. For example, instead of letting players pick their lockers, or ordering them numerically or alphabetically, “Coach Bud” strategically sat each player next to one teammate they could influence and one who could influence them. He instituted team dinners after road games. The examples go on, but maybe nothing signifies the adoption of his methods more than this excerpt reported by SI.com’s Lee Jenkins:

“Everyone is part of the shot,” [shooting guard Kyle] Korver says. “Everyone matters, and if you feel like you matter, you take ownership.”

That’s engagement, folks. Engagement isn’t about how fun your job is or how often you talk to your boss. It’s about your employees knowing that they matter. Employees who feel valued are more productive and happy people. This is what every boss should aim for, not just the ones on the hardcourt.

If you’re a business owner or you lead a team, take notes from Coach Bud. Think about the little things. Heck, even team meals and seating arrangements apply to many offices. Engage your team and you might discover that you have more all-stars than you thought.

My first day of Army Basic Training was pretty memorable for a couple of reasons. One: it was the last time I ever cried in the Army (maybe I’ll tell you that part of the story another time). And two: it taught me the power of metaphor in action.

That morning, I watched with the other females in my platoon as our male counterparts marched into a little room sporting Flock of Seagulls haircuts, mullets, and other deeply individual ‘dos and then filed out one by one onto the bleachers opposite us, shorn of their individuality, all wearing fresh “induction cuts” and solemn faces. You’re in the Army now, Soldier.

What I only vaguely understood that day was that this simple, symbolic act was the beginning of a time-honored process that—over the next grueling 10 weeks—would transform a bunch of rag-tag  late teens and twenty-somethings into a cohesive band of brothers and sisters who would learn to trust themselves, their battle buddies, and their leaders with their lives.  I would learn what kind of leadership it takes to create bonds that sometimes last a lifetime and push us beyond the limits of our physical and mental endurance.  Our leaders got us to run hard, shoot straight and have each others’ backs all while we endured constant misery and sleep deprivation.

The time-tested systems and processes the Army has in place for getting things done are documented in triplicate, but  inspiring and nurturing that kind of trust and extraordinary effort is more about principles than process. Though Army leadership techniques are not always directly transferable to the business world, key principles are applicable to any leader, anywhere.

Genuine competence is obviously a necessity for gaining the respect and trust of peers and employees in any business. Relationships that foster cooperation begin with mutual respect and shared experience. And when corporate, leadership, and employee values are aligned and everyone is taking action and communicating from those values, you have an unstoppable tour de force that can accomplish extraordinary things under extraordinary circumstances.

How do you create trust and inspire employees to give their best? More transparent communications are a good start.  Contact us to start the conversation.